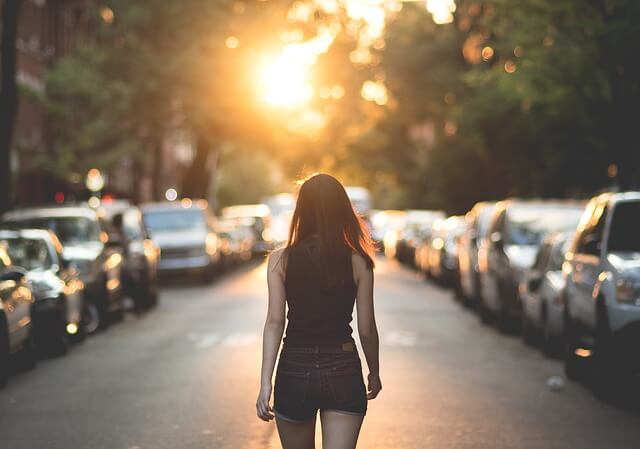 Described in its own words, Girl Walk All Day is a “feature-length dance music video and tale of urban exploration that follows three dancers across New York City. They turn the city’s sidewalks, parks and architecture into an evolving stage as they spread their joy of movement.” It’s basically a pseudo-voyeur film, though with narrative and intention, that follows three dancers across public spaces in NYC as if they were spontaneously performing on a natural open stage.

The project is a collaboration of numerous artists under the house name Wild Combination, including director and cinematographer Jacob Krupnick, multiple producers, actors, cameramen, web-designers, etc. The main actors/dancers are: The Girl, played by Anne Marsen, a professional ballet dancer from New Jersey with a parallel career in jazz and hip-hop; The Gentleman, played by Dai Omiya, a Japanese tap dancer; and The Creep, played by John Doyle, an amateur alternative dancer. This film is synchronized to All Day, the album by mash-up musician Gregg Gillis.

Besides its innovativeness, this project is really an epitome of art convergence. Although the primordial medium is film, the final product merges various forms of classic and cotemporary art such as music, painting, architecture, dance, sculpture, film, theater, digital design, fashion and cosmetics. On a first level, the spectator observes dance, drama, music and film; on a second level –considering the stage is all NYC– the spectator sees architecture, painting and fashion.

Perhaps the most interesting part of the product is the people in the background caught in fraganti. While some gawks and gazes are evident, most people are absolutely unaware of a dancer performing; they are submerged in their own distractors (mostly digital devices). The film is important because it gives you the feeling that cities are open stages where you can dance…perform; where beautiful forms of art converge.

That’s where Walter Benjamin was wrong. This film proves that recording, re-production, convergence, and distribution of art, especially through film, are able to convey a place or moment’s original aura even better than the performing act itself. In this film, innocent spectators don’t seem to be in awe of an aura producing moment; however, the film’s final viewers usually are. Technology and science can ultimately defeat the problems associated with authenticity. In any case, if we followed Mr. Benjamin’s silly quest for the authentic aura, there would be no way to experience this project –or all the other million art pieces around the world– first hand.